Apple is officially a Trillion-Dollar Company

The landmark achievement was made on Thursday, August 2, after its shares hit $207.05.

Co-founded by Steve Jobs in 1976, the company has become one of the leading computer and mobile brands in the world.

According to reports from The Guardian, Apple hit the $1tn (£767bn) mark after reporting better-than-expected sales figures for the third quarter, pushing shares of the iPhone giant higher and easing the value of the company up from $935bn.

Senate President, Bukola Saraki has been appointed the national leader of the Peoples Democratic Party, PDP at the party’s NEC meeting on Thursday.

Being the highest office holder in the party at the moment, Saraki will replace his deputy, Senator Ike Ekweremmadu, who held the position until the defection of Saraki and other top APC members to the PDP.

The arrival of Saraki was heralded by loud ovation as he was led into the venue of the meeting by PDP national chairman, Prince Uche Secondus, and other top leaders of the party.

The NEC meeting attended by the four former members of the All Progressives Congress (APC) was in celebration mood as the politicians exchanged banters.

Apart from the former APC chiefs, the meeting hall had key figures in the PDP, including governors, lawmakers and some of the presidential aspirants.

Newcastle United have annouced the signing of Japan forward Yoshinori Muto, 26, from Mainz in a £10million deal after he was granted international clearance to work in England.

The Premiership club announced the arrival of their first ever Japanese player on Thursday afternoon via their Twitter page.

‘We are delighted to announce that Japan international Yoshinori Muto has completed a move to Newcastle United after he was granted a work permit at a hearing today.’

After completing his deal and passing his medical, Muto said:  ‘I am very happy to be a player for Newcastle United. I am really looking forward to playing in front of the fans.

‘As the first Japanese Newcastle United player, I am honoured to be a player for such a big club. I hope to achieve good results – that is what I am here to do. I would like to perform well and leave my name in Newcastle’s history.’ 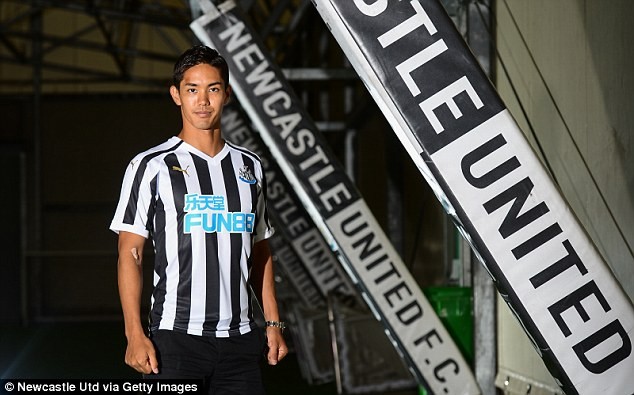 Speaking upon his arrival, manager Rafa Benitez said: ‘I am really pleased to have Yoshinori Muto with us. We were following him for quite a while.

Hopefully, he can bring us his energy and work-rate and help the team to improve and be better for the new season.’ 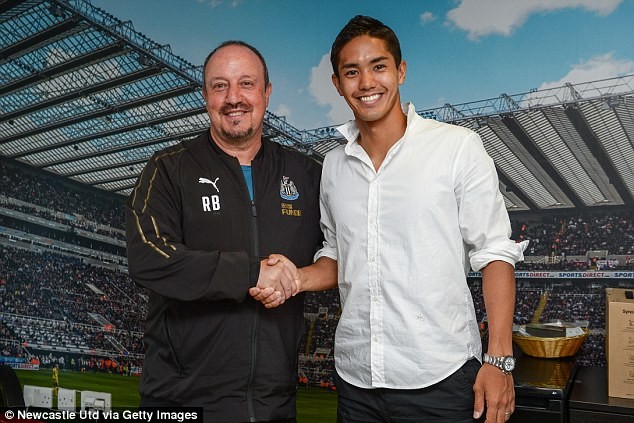 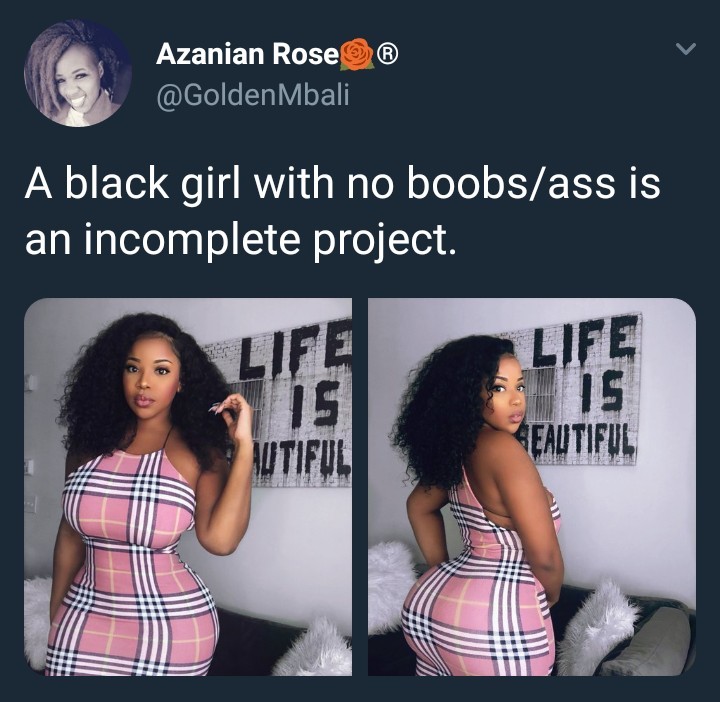 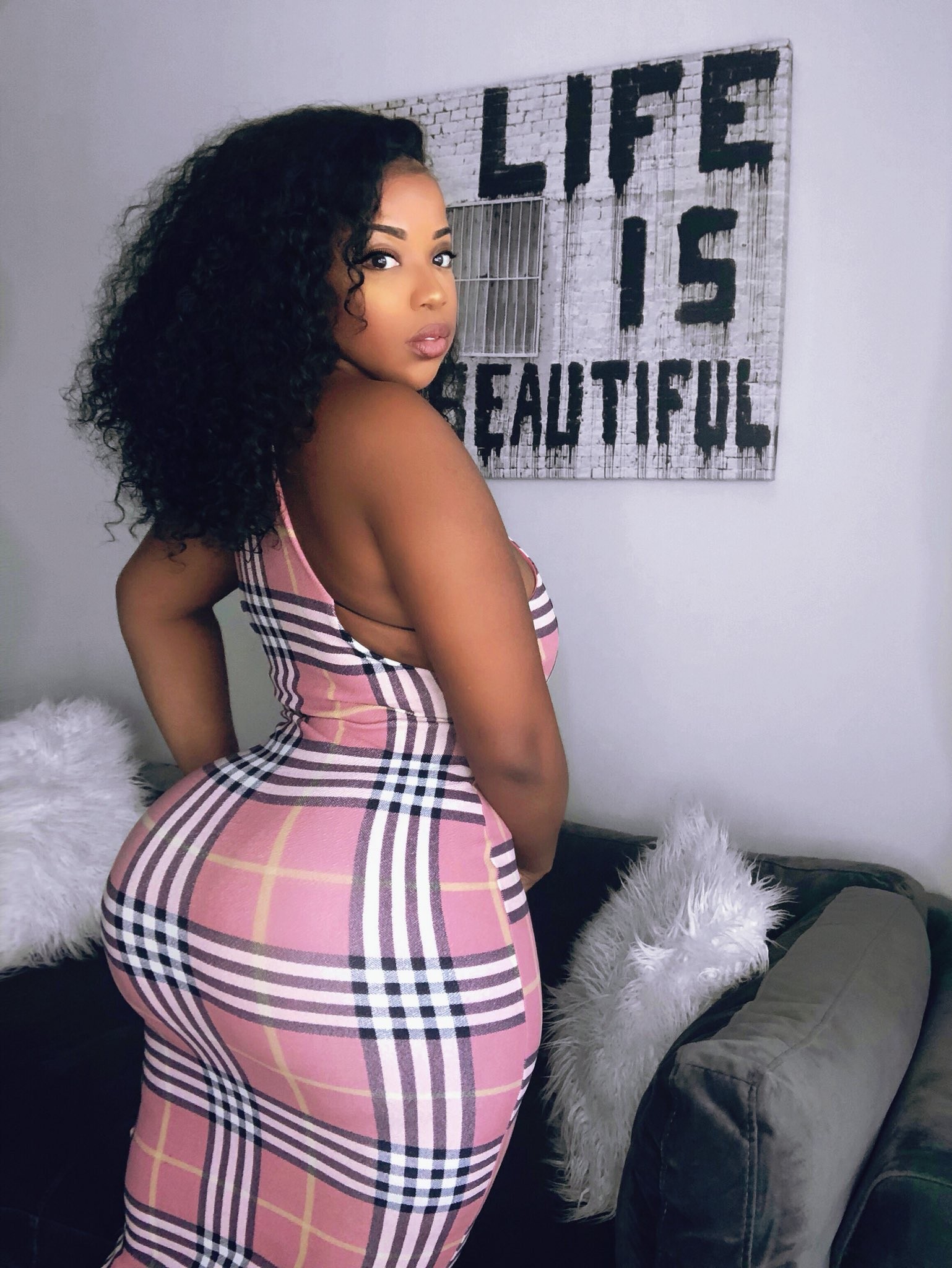 Saraki Must Vacate That Seat Of Senate President – Oshiomhole

The National Chairman of the ruling All Progressives Congress, Adams Oshiomhole; and some senators elected on the platform of the party led by the Senate Leader, Ahmed Lawan, on Wednesday met behind closed doors with President Muhammadu Buhari at the Presidential Villa, Abuja.

The meeting came amidst defections, as Oshiomhole talked tough…

Oshiomhole told State House correspondents at the end of the meeting that the right thing for the President of the Senate, Bukola Saraki, is to vacate his seat, having left the party.

This is just as the Sokoto State Governor, Aminu Tambuwal, announced his defection from the APC to the Peoples Democratic Party on Wednesday. By his action, Tambuwal has increased the number of the APC governors to leave the ruling party to three. Governor Samuel Ortom of Benue State and his counterpart from Kwara, Abdulfatah Ahmed, had earlier announced their defection to the PDP.

Oshiomhole said it was a matter of honour for Saraki to leave “the crown in the family it belongs to.”

Oshiomhole said, “But whatever is the reason, we can defect from the party but we can’t defect from Nigeria. The only thing is that there are other consequential issues that every man or woman of honour who had taken such decisions would be expected to follow through.

“I mean you should not collect a crown that belongs to a family and wear it on behalf of the family if for your personal reasons which he has enumerated that he has gone to another family.

“It is just a matter of honour to leave the crown in the house that the crown belongs to.

“As it stands even now, the APC is still the largest party in the Senate. We have 53 senators, that is much more than what the PDP has, or APGA has.”

The former Edo State governor said nobody in the party would be surprised by the decisions of those who defected because the signs were clear before now.

He however admitted that it was a tempting moment for the party.

He added, “Nobody in the APC will be surprised about the development. In fact, they have stayed a little bit longer than we thought. Last week, the Kwara State governor said he was leaving but he didn’t say when. So, we are not surprised at all. But these are what I might call temping moments because I had faced similar situations in my state, when people were leaving.

“But the beauty of democracy is that whether big or small, it is one man one vote on election day. There is no difference between a senator, a president, a journalist and any other person.

“In a sense, we have to accept that once a couple for one reason or the other find out that they are not compatible, the only honourable thing is to go.”

Oshiomhole, however, said he was happy that Saraki admitted that he and Vice-President Yemi Osinbajo as well as some state governors tried their best to resolve the matter that led to his exit.

”But he argued that those efforts came too late. But I couldn’t have started acting before I was born,” the party chairman said.

While admitting that there were lessons to be learned from the development, Oshiomhole said going forward, he would expect the system to get stronger to the extent that it was able to learn the correct lessons and take the correct steps.

An upcoming trap rapper simply identified as bugzydvinci on Instagram has taken to the platform to call out out the Eastern rapper, Phyno for jacking his style.

Bugzydvinci said Phyno plagiarized his slang ‘FuoAnwuru’ and tweaked it to ‘Fuwa’. Recall in 2016 Phyno was implicated in a song theft accusation involving Pia Mia over the song ‘I’m A Fan’.

Bugzydvinci has gone berserk on Instagram dragging out Phyno for filth with several post. He shaded the rapper saying he went gospel then he had to steal his stuff to revive hip hop in him.

Here are some disturbing statements Bugzydvinci made about Phyno on his Instagram:- Why Chioma Is Not Driving Her Porsche – Davido Reveals

Davido reveals why his woman, Chioma is not driving her assurance Porsche, says she can’t drive yet.

The pop star surprised his lovely girlfriend with a brand new Porsche worth 45million naira on her birthday.

He responded with caption:-

Sorry my woman can’t drive yet. Plus she hate the attention and only uses my driver when she need to use the car and I haven’t had time to teach her how to drive. But may be a driver will do… U can apply DMW camp seems to be on fire after a close friend of Davido threw some Epic shades at him on an Instagram post on Instablog.

Patrick Anyaene of GoldenBoy Entertainment (Peruzzi is signed to his Record Label and also has a contract with DMW). Patrick aired his opinion about Davido & Chioma’s Porshe news on the Instablog post and Davido replied him.

The Beef is developing, we promise to keep you all posted as the story unfolds.

As if that was not enough, Patrick also shared another post on his Instagram story about Davido’s jet. Seems a Serious WAR is looming as Patrick has promised to reveal more lies the DMW boss has been feeding Nigerians with.

You all should keep calm, grab your Pop corn and Coke and stay glued to surebanger

Rihanna says people in relationships have to be content with their partners the way they are.

She said most people are interested in the idea of what their partners could become, and not in the present state they met them.

Rihanna dished out some dating tips in an interview with British Vogue. “I get a lot of boy-advice questions,” Rihanna said in the new issue of the fashion magazine.

She went on to explain how people eventually get “mad disappointed” when reality fails to match up to their expectation.

Mavin Records Artiste, Reekado Banks took to his twitter handle to reveal he will be releasing his new EP come october 2018, The ‘Bio Bio’ crooner also went further as he bragged about himself been so talented and he will definitely prove it all over again.

“My EP drops in October and it will be a piece you’ll brag about! I AM bleeping TALENTED , AND I’LL PROVE IT AGAIN! Thank you for believing in Me”